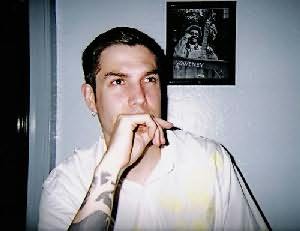 Jeremy Robert Johnson is a novelist and the author of a multitude of acclaimed short stories. His writing has been nominated for the Pushcart Prize, the Needle Award, and the Bram Stoker Award.

Screams from a Dying World (2009)
David Agranoff
"A kaleidoscopic burst of strange stories and righteous anger, balanced be a real concern for the future of our species, and more importantly, the ever-more-ravaged sphere we inhabit."

Sip (2017)
Brian Allen Carr
"An utterly transporting voyage through an oddly sweet, surprisingly funny, and horribly human post-apocalyptic wasteland. As much a celebration of the wonders of our daily existence as it is an indictment of the hungers which bring us low, Brian Allen Carr's Sip inflated my shadow-soaked head and set me floating on strange and beautiful winds. Never before have I so deeply wanted to return to the end of the world."
Visitors to this page also looked at these authors
Beverly Long
Robert Conroy
Steve Jackson
Jean Johnson
Hugh Miller
Joan Hessayon
Joyce Johnson
Jeannie Johnson
Sarah O'Brien
J A Konrath
Craig Russell
Pat Conroy
Joan Jonker
Janice Kay Johnson
Carsten Stroud
Simon Scarrow