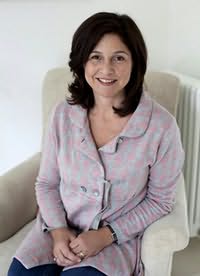 (b.1965)
Sister of Sadie Jones
Melissa Jones was born in London in 1965. The early London life that she shared with her sister, novelist Sadie Jones, was full of actors, directors and artists talking late into the night, playing poker and laughing. From her mother she inherited a love of beautiful things, food, houses and gardens; from her father a sense of foreignness based on his stories of growing up as one of seven children on a large country property in Jamaica before electricity and the telephone.

After graduating from Oxford University, Melissa began working in TV in London, first as a runner and PA and then after joining SelecTV (maker of Birds of a Feather and Lovejoy) as a script editor and producer. She then wrote her first two books, Cold in Earth (1998), and Sick at Heart (1999), both dark books that were very well reviewed.

While her two children were young Melissa was distracted into a number of different jobs, writing proposals for the accountancy firm, KPMG, journalism for the architectural press, and a book called Interiors for the Under Fives, published by Wiley in 2005. In 2007 she and her family moved to Essex, where she wrote her new novel, THE HIDDEN HEART OF EMILY HUDSON.
Novels
Cold in Earth (1998)
Sick At Heart (1999)
The Hidden Heart of Emily Hudson (2010)
aka Emily Hudson