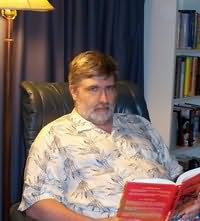 By day Dana King works at an undisclosed location. It’s not classified; he’s just not going to tell you. He has lived in and around Atlanta, Boston, the Maryland suburbs of Washington DC, Chicago, Northern Virginia, and back to the DC suburbs again. He served three years in the Army, and has worked as a musician, teacher, computer network engineer, pre-sales software consultant, general manager of a coin-operated laundry company, and as a systems administrator. Steady, gainful, employment has long been an issue.

Dana’s first self-published novel, Wild Bill, is the story of an FBI investigation disrupted by a mob war in Chicago. His second, Worst Enemies, is a tale of deceit and murder in a small Pennsylvania town.