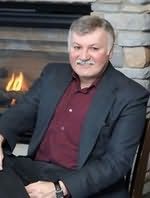 (b.1952)
Loren D. Estleman graduated from Eastern Michigan University in 1974 with a Bachelor of Arts degree in English Literature and Journalism. In 2002, his alma mater presented him with an honorary doctorate in letters. He left the job market in 1980 to write full time, after a few years spent "pounding out beat-the-train journalism" during his day job as a reporter before going home and writing fiction at night.

His first novel was published in 1976, and has been followed by more than 70 books and hundreds of short stories and articles. His series include novels about Detroit detective Amos Walker, professional killer Peter Macklin, L.A. film detective and amateur sleuth Valentino, and the Detroit crime series. On the western side is the U.S. Deputy Marshal Page Murdock series. Additionally, he's written dozens of stand-alone novels.

His books have been translated into 27 languages and have won multiple Shamus, Spur, Western Heritage, and Stirrup awards. He has been nominated for the National Book Award and the Edgar Allan Poe Award. In 2012, the Western Writers of America honored him with the Lifetime Achievement Award.

He lives in Michigan and is married to writer Deborah Morgan.

From Where the Sun Now Stands (1962)
Will Henry
"The most critically acclaimed Western writer of this or any other time!"

Disheveled City (1990)
(Mitch Roberts Mystery, book 6)
Gaylord Dold
"Mitch Roberts is one of the more likeable heroes who have taken up the gun and plastic badge in recent years."

Johnnie D (2000)
Arthur Winfield Knight
"As exciting as a bank heist, movind with the speed of Dillinger's Ford V-8."

An Uncommon Enemy (2001)
(Eden Murdoch, book 1)
Michelle Black
"Clear-eyed and moving - this is the closest thing to a collaboration between Jack London and Wilkie Collins."

Donovan's Dove (2004)
Joseph A West
"I look forward to many years of entertainment from Joseph West."

Poacher's Moon (2008)
John D Nesbitt
"The time is ripe for a good contemporary novel with a Western setting."

Sorrel Moon (2012)
Cotton Smith
"Cotton Smith's is a significant voice in the development of the American western."

The Adventure of the Deadly Dimensions (2017)
(Sherlock Holmes vs. Cthulhu, book 1)
Lois H Gresh
"The name Lois Gresh is as much advertising as her work needs. However, it is my privilege to recommend her latest tour-de-force. Just how the literary establishment missed engineering a dream collaboration between H.P Lovecraft and Arthur Conan Doyle before now is a mystery; but if it was waiting for Lois Gresh to do the thing justice, this one is all the justification necessary."

Angel Falls (2017)
(Josey Angel, book 2)
Derek Catron
"Derek Catron's Trail Angel is a solid debut. ... The history is strong, the characters sharply drawn, and the narrative moves along like a locomotive. ... We're lucky to be able to look forward to more from this author."