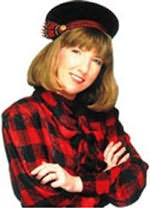 Laura Kinsale grew up in a small country town, surrounded by the influenceof her family's women: her mother, her grandmother and some maiden aunts.During her childhood she dreamed to be a painter, own a twenty-thousand acrehorse ranch in Arizona or the first woman president. But, she becameinterested into geology because near her grandmother's house, there was aroad-cut, that it showed the layers of limestone clearly, and there were fossils in it.

Laura obtained a Master of Science in Geology from the University of Texasat Austin. She worked as petroleum geologist, a career which consisted ofgetting out of bed in the middle of the night and driving hundreds of milesalone across west Texas to sit at drilling rigs, wear a hard hat, andattempt to boss around oil-covered males considerably larger than herself.While working, also spending a great deal of time sitting rigs and living inhorrid little motel courts in small towns, and she started reading a lot. Itwas pure escapism for her. She didn't really consider writting as a seriouscareer until she figured out her first plot, at thirty-five years after sixsix years as a geologist.

Laura Kinsale became a winner and multiple nominee for the Best Book of theYear award given by the Romance Writers of America. Her heroes are full offlaws or with physical problems, and her heroines also are imperfect. Shesays: "It's well known that I think making the heroine too perfect is agreat way to create a character readers will hate!". She spend long periodsof time, attempting to figure out What-Happens-Next, and she confesses thather husband, David, greatly assists her in figuring out how to end a scene.She says: "Really, his name should go also on the cover too, but he refuses.I wonder why?". From 1985 to 1994, she wrote one book a year, but shedecided she needed more time to write her books.

Laura divides her time between Santa Fe and Dallas.

A Dangerous Man (1996)
Connie Brockway
"Connie Brockway is a master at creating sparkling chemistry between an adorable heroine and a cool-hand hero!"