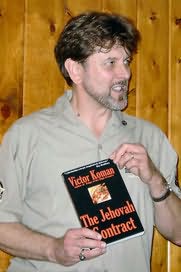 aka John Cleve
Victor Koman is the author of eight novels and is at this moment working on his ninth. A native Californian, Koman wrote the underground classic millennial-noir novel The Jehovah Contract and the medical thriller Solomon's Knife. Both novels won the Prometheus Award in their respective years.

The Jehovah Contract was written in 1978 and '79. It was first published in 1985 -- in Bavaria (by publisher Heyne Verlag) -- as a German language paperback titled Der Jehova-Vertrag. Ray Bradbury says of Koman's first novel, "The Jehovah Contract has a fascinating concept, imaginatively delivered," and of Koman, "Would that there were a dozen more writers like him in the field." Solomon's Knife, also available from Amazon.com, was written in 1988. Politically potent, it is a medical thriller and courtroom drama that shatters the moribund philosophies clinging to the abortion dilemma and creates a radical fusion of Pro-Life and Pro-Choice forces when a new medical technique threatens to make abortion obsolete. Franklin Watts published the hardcover in 1989 and it won the Prometheus Award (making Koman the first two-time winner) in 1990. A German translation, Der Eingriff, came out in 1991 from Goldmann Verlag. He co-wrote (with Andrew J. Offutt), two novels in the SPACEWAYS saga: #13, Jonuta Rising! and #17, The Carnadyne Horde, published by Berkley Books in 1983 and 1984. Both were issued under the house name "John Cleve."

Koman's short story "Bootstrap Enterprise" appeared in The Magazine of Fantasy and Science Fiction and was noted by critic Ellen Datlow as one of the best stories of 1994. His stories have also appeared in Fred Olen Ray's Weird Menace, Paul Sammon's The King is Dead -- Tales of Elvis Postmortem, Ed Kramer's Dark Destiny II and Dark Destiny III, as well as Kramer's and Brad Linaweaver's Free Space.

His latest novel, Kings of the High Frontier, won the Prometheus Award in 1997, making him the first three-time winner of the solid-gold prize. The novel was the first exclusively Web-available novel to win such an award...and went on to earn a spot on the Preliminary Ballot for the Science-Fiction and Fantasy Writers of America's prestigious Nebula Award.

The Magazine of Fantasy and Science Fiction calls Kings "an intriguing, exhilarating, thought-provoking and, yes, sprawling novel that brings back the sense of wonder that drew so many of us into science-fiction in the first place." A community activist with a quixotic sense of what's important, Koman was instrumental in preventing the destruction of Disneyland's last bubble-topped Mark III monorail ("Old Red"), generating a one-man public relations campaign that resulted in nationwide news coverage. The Walt Disney Company subsequently saved, restored, and converted the historic monorail fuselage into a street-legal promotional vehicle. Koman has also appeared as an extra in several films, including Star Trek -- The Motion Picture, CyberZone, Nightshade, Rapid Assault, Mom's Outta Sight, X-Ray Kid, Billy Frankenstein, and Little Miss Magic (in which his actress daughter, Vanessa Koman, played the title role). He lives in southern California with his wife, Veronica, and daughter, Vanessa, as well as their cat and goldfish.