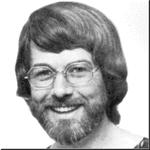 aka John Cleve
Andrew Jefferson Offutt was an American science fiction and fantasy author. He wrote as Andrew J. Offutt, A. J. Offutt, and Andy Offut. His normal byline, andrew j. offutt, has his name in all lower-case letters. His son is the author Chris Offutt.

Offutt began publishing in 1954 with the story "And Gone Tomorrow" in If. Despite this early sale, he doesn't consider his professional life to have begun until he sold the story "Blacksword" to Galaxy in 1959. His first novel was Evil Is Live Spelled Backwards in 1970.

As an editor Offutt produced a series of five anthologies entitled Swords Against Darkness, which included the first professional sale by Charles de Lint.

Offutt also wrote a large number of pornographic works under twelve different pseudonyms, not all of them identified. Those known include John Cleve, J. X. Williams, and Jeff Douglas. His main works in this area are the science fiction "Spaceways" series, most of whose volumes were written in collaboration, and the historical "Crusader" series.

Series contributed to
Conan (Lancer/Ace Books)
15. The Sword of Skelos (1979)