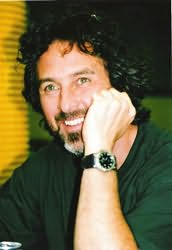 Chris Lynch is a National Book Award finalist and the author of several highly acclaimed books for young adults, including Me, Dead Dad, & Alcatraz and the Michael L. Printz Honor Book Freewill, as well as Iceman, Shadow Boxer, Gold Dust, and Slot Machine, all four ALA Best Books for Young Adults and winners of several other prestigious awards. He holds an MFA from the writing program at Emerson College. He lives in Scotland and has two children.

Series contributed to
After Dark (with Libby Hathorn)
30. The Spirited Boy (1998)

Call Me by My Name (2014)
John Ed Bradley
"The book is so many other things that football might come third or fourth on the list. It is unflinching American history, it is cultural anthropology and it is a riveting morality play. Probably most of all it is a love story of the finest kind because it hurts all over and it mercilessly pits one kind of love against another in a genuine blood sport. John Ed Bradley has gathered a fine and believable cast of characters to tell a tough story, but above all Rodney Boulet stands as one of the most authentically, uncomfortably honest adolescent males I have read in quite some time."
Visitors to this page also looked at these authors
Barry Lyga
D J MacHale
Mike Lupica
Marie Lu
David Lubar
Jonathan Maberry
Walter Dean Myers
Pittacus Lore
Sarah J Maas
John Flanagan
Emery Lord
Mercedes Lackey
Anthony Horowitz
Lois Lowry
James Patterson
Gail Carson Levine