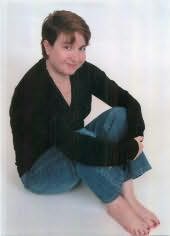 aka Amanda Allen, Amanda Carmack, Laurel McKee
Amanda wrote her first romance at the age of sixteen--a vast historical epic starring all her friends as the characters, written secretly during algebra class (and her parents wondered why math was not her strongest subject...)

She's never since used algebra, but her books have been nominated for many awards, including the RITA Award, the Romantic Times BOOKReviews Reviewers' Choice Award, the Booksellers Best, the National Readers Choice Award, and the Holt Medallion. She lives in Oklahoma with a menagerie of two cats, a Pug, and a very bossy miniature Poodle, along with far too many books.

When not writing or reading, she loves taking dance classes, collecting cheesy travel souvenirs, and watching the Food Network--even though she doesn't cook.
Genres: Historical Romance