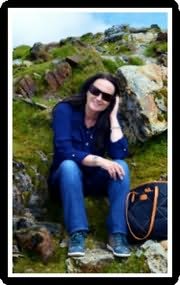 (b.1960)
Carole Mortimer was born in a tiny village in Bedfordshire, England, and is the youngest of three children, having two older brothers. She’s very happily married to Peter, and the two of them live on the Isle of Man. They have six sons – so, as you can see, Carole has always been out numbered by the men in her life! The sons are all grown up now.

Having always wanted to be a nurse, Carole unfortunately suffered a back injury just a year into her training, and so had to make a hasty career change, and she then became a supervisor of an office department for a couple of years. Having been reading HMB books since she was a precocious 11, she began writing for Harlequin Mills and Boon herself in 1978 – she assures everyone she was only 10 years old at the time! - and is currently working on her 190th book. She writes for the Modern/Presents series, and also the Harlequin Historical series, and has great fun writing for both series.
She loves spending time with her family, but her other interests, when she has time, include reading – of course! – travel, and cross-stitch, and working on furnishing and decorating the Regency style dolls house Peter bought for her several years ago. The cross-stitch comes in handy then, because Carole is making all the carpets for the dolls house herself.

Dangerous Liaisons
The One and Only (1995)

Expecting!
Pregnant By The Millionaire (2006)

Dark Nights with a Billionaire
The Venetian's Midnight Mistress (2008)