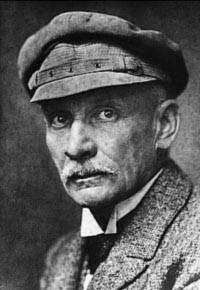 Austria (1868 - 1932)
Gustav Meyrink was an Austrian writer. Meyer, who later changed his name to Meyrink, went to Prague at the age of 16 to attend the business school and stayed there for a number of years. He was deeply influenced by the atmosphere of the city, and it was here that he started his career as a writer of fantastic literature. He began with grotesque satires, which he later combined with occultism and mysticism, culminating in his most famous novel Der Golem (1915). He also wrote several fables like 'Der Fluch der Kröte' ('The Curse of the Toad', 1903).
Novels
The Golem (1914)
aka Der Golem
The Green Face (1916)
Walpurgis Nacht (1917)
The Angel of the West Window (1927)
The White Dominican (1994)