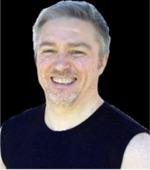 aka Thomas Blackthorne
John Meaney's first novel, TO HOLD INFINITY, was one of the DAILY TELEGRAPH'S 'Books of the Year'. It was also nominated for the BSFA Award, as was his second novel, Paradox. John Meaney has a degree is physics and computer science and is a black belt in shotokan karate. His addictions include weightlifting, running, languages and science, all genres of fiction, cats, coffee and chocolate.

Anthologies containing stories by John Meaney
The Best of Interzone (1997)