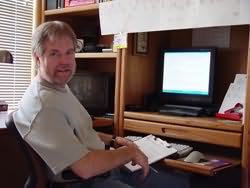 (1943 - 2010)
Jay MacLarty was born in Spirit Lake, Iowa, and grew up in the Midwest (Iowa, Nebraska, and Minnesota). As an adult, he lived for extended periods in Florida, California, Nevada, and Colorado.

Always an avid reader, MacLarty finally turned his attention toward the written word, working nights and weekends on a lengthy and sweeping ethnic saga. The manuscript was "well reviewed," but judged "too long and literary" for a first-time novelist, and he was told to "go write the popular book first."

That book became The Courier - the first in a series starring common-man hero Simon Leonidovich - a high-tech thriller, drawing on MacLarty's unique background of business, politics, and high-tech.