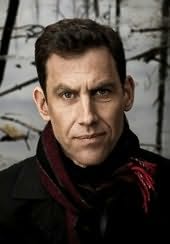 Östlundh was born in 1962 into an academic home in the university town of Uppsala, just north of Stockholm. He grew up in Stockholm where he still lives.

Since both his parents were politically active, Östlundh's youth was influenced by the Social Democratic party and the labour movement, but after an initial stint working for the movement's news agency he went his own way.

He studied comparative literature and history of ideas at Stockholm University. He made an early debut as a writer (1981), but later came to work mainly as a journalist for Sweden's best-selling morning paper Dagens Nyheter, among others. In the mid-nineties he was hired as a scriptwriter marking the start of an intensive period working in the TV industry until the publication of his first crime novel.

Östlundh is married and has three sons. His favourite authors include Dennis Lehane and Haruki Murakami. When he was fifteen he cut class just so he could read all ten of Sjöwall & Wahlöö's mysteries.
Novels
The Viper (2012)
The Intruder (2015)