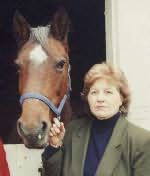 Christine, the quietest of the three, was the most productive; she wrote more than 100 books, translated into 12 languages.

Christine Pullein-Thompson was born at Wimbledon on October 1 1925, the younger of twins. Her father, Captain HJ "Cappy" Pullein-Thompson, had been badly affected by the First World War and made his living selling refrigerators; her mother, Joanna Cannan, was a successful writer.

Christine grew up at Peppard, near Henley on Thames, and attended school only in the mornings, though there were numerous house rules, including: "Don't hint"; "Don't be personal"; "Don't whine" and "Don't talk horses at meals".
Series
Chill Valley Hunt
1. We Hunted Hounds (1949)
2. I Carried the Horn (1951)
3. Goodbye to Hounds (1952)