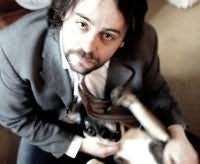 Anthony Reynolds was born in Wales in the early 1970's. He is not the author of the Sci-Fi books. He has to date completed three biographies (On Scott Walker and The Walker brothers, Jeff Buckley and Leonard Cohen) and two collections of poetry (These Roses taste like ashes, Calling all Demons).

In April of 2010 'The Impossible dream' was nominated for the Association for Recorded Sound Collections Awards for Excellence in Historical Recorded Sound Research.

He enjoys wine, Cuban Cigars, photography and abstaining from meat and fish.