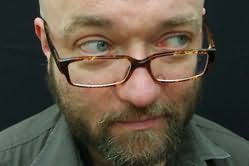 (b.1965)
Dan Abnett is one half of the writing team behind such hits as Legion Lost, The Punisher and Jet. Dan is a British writer, mainly of comic books and gaming fiction. Primarily Abnett has worked for 2000 AD and Marvel Comics (including their UK imprint) since the early 1990s, although he has also contributed to DC Comics titles. His Warhammer Fantasy and Warhammer 40,000 novels and graphic novels for Games Workshop's Black Library now run to several dozen titles.

Chapbooks
The Lords of Misrule (1999)

Doctor Who : Eleventh Doctor
The Silent Stars Go By (2011)

Marvel Novels
1. Everybody Wants to Rule the World (2018)