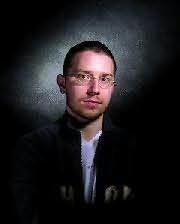 Nick Kyme is an editor and author who originally hails from Grimsby, a small town on the east coast of England. His fledgling writing career began in 1998 when his very first article for the Games Workshop fanzine The Citadel Journal was published.

Nick went on to build on this success with several more gaming articles for this publication, followed by commissioned pieces for the magazines Town Cryer and Fanatic. His first work of fiction, the short story Perfect Assassin appeared in the bi-monthly Inferno! magazine. It was followed by two further stories and later anthologised in the novel The Cold Hand of Betrayal.

Upon completing a BA (HONS) degree in English and History at the University of Lincoln, Nick moved to Nottingham in 2003 to work on White Dwarf magazine first as a Layout Designer then a Staff Writer and Journalist. During this time, he had several freelance articles published in White Dwarf and also wrote his first novel, Back from the Dead a dark, science fiction story set in the world of Necromunda.

Since then, Nick has taken up a position at Games Workshops publishing house, the Black Library, as an editor. In this role, he has been involved in a multitude of diverse projects, including art books for Namco Bandais Mark of Chaos game and EA Mythics Wahammer Online: Age of Reckoning.

Sherlock Holmes
The Legacy of Deeds (2017)