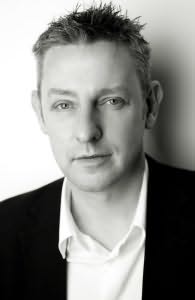 David F. Ross was born in Glasgow in 1964, and he lived in various part of the city until the late 70s. He subsequently moved to Kilmarnock, where he has lived since. He was educated at James Hamilton Academy until being politely asked to leave. (Expulsion is such a harsh word, isnt it?) Following a frankly ludicrous early foray into sporadic employment (Undertakers, Ice Cream Parlour, Tennis Groundsman, DJ hell save these stories until he knows you better), David found himself at Glasgow School of Art, studying architecture.In 1992, he graduated from the Mackintosh School of Architecture. He is now the Design Director of one of Scotlands largest, oldest and most successful practices, Keppie Design. (Funny old world, eh?)

David has worked all over the world and he led his practice strategy for projects in countries as diverse as China, Egypt, Malaysia, India and Libya. He is a designated business leader for East Ayrshire Council, a Board Mentor for Entrepreneurial Spark and he was design advisor to Strathclyde Passenger Transport for their modernisation programme of the Glasgow Subway in advance of the 2014 Commonwealth Games. He is married to Elaine and has two children, Nathan and Nadia, who have both signed legally binding agreements to house him in the best Old Folks Home his money can buy. He is a Chelsea fan from long before the cash-rich days and occasionally writes stream-of-consciousness rubbish for @ByTheMinChelsea and other @ByTheMinSport feeds on Twitter.

Novels
Welcome to the Heady Heights (2019)