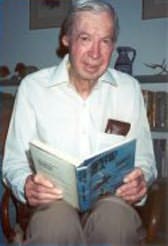 South Africa (1920 - 2001)
Geoffrey Jenkins was born in Pretoria, South Africa. During the Second World War he was a war correspondent for the Sunday Times. In that time he became friends with Ian Fleming. After the war he returned to Africa and settled in Rhodesia, now Zimbabwe. He married Eve Palmer, also an author. Jenkins had a senior position with The Star in Johannesburg. After three novels, all best-sellers, he resigned.