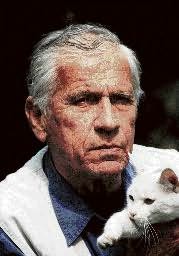 (Gerard Kornelis van het Reve)
Netherlands (1923 - 2006)
Gerard Reve was one of the greatest Dutch writers of the 20th century. He was born into a communist family but later in life entered the Catholic church and became a devout worshiper of the Virgin Mary, to the disbelief and ridicule of many colleagues and readers alike. He is universally known for his stately Dutch prose, his concept of 'tragic irony', the theme of homosexuality, his provocative political remarks, and his very peculiar mix of humour and sadness.