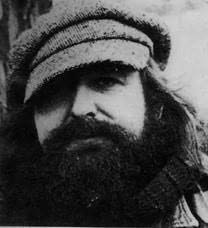 aka Bill Barclay, Edward P Bradbury, James Colvin
Michael Moorcock is one of Britain's best-known and most respected novelists.

Editor of New Worlds on two occasions, he has won the Guardian Fiction Prize for The Condition of Muzak, the fourth Jerry Cornelius novel. He lives in Texas with his wife.

Sanctuary of the White Friar
1. The Whispering Swarm (2015)

Series contributed to
Elric: Graphic Novel
Elric: The Dreaming City (1991)
Elric: The Making of a Sorcerer (2007)

Doctor Who : Eleventh Doctor
The Coming Of Terraphiles (2010)

Books about Michael Moorcock
The Entropy Exhibition (1983) by Colin Greenland

The Winds of Gath (1967)
(Dumarest, book 1)
E C Tubb
"His reputation for fast-moving and colourful SF writing is unmatched by anyone in Britain."

Do Androids Dream of Electric Sheep? (1968)
(Bladerunner, book 1)
Philip K Dick
"Dick is quietly producing serious fiction in a popular form and there is no greater praise."

The Beast That Shouted Love at the Heart of the World (1969)
Harlan Ellison
"Written with an almost maniacal energy...the many Ellison enthusiasts here will be glad to have these stories available at last...including a longer, revised version of the Nebula-winning A Boy and His Dog."

The Left Hand of Darkness (1969)
(Hainish Cycle, book 4)
Ursula K Le Guin
"As profuse and original in invention as The Lord of the Rings...Miss LeGuin makes this book something more than the graceful and accomplished fantasy it most certainly is."

The Moment of Eclipse (1970)
Brian Aldiss
"Perhaps his best short story collection for a long while."

The Pastel City (1971)
(Viriconium, book 1)
M John Harrison
"So much better than other novels in its field that I believe it will in time become a favourite classic among readers of science fantasy."

Path of the Eclipse (1981)
(Saint-Germain, book 4)
Chelsea Quinn Yarbro
"A demon-lover anyone would welcome with open veins!"

Take Back Plenty (1990)
(Tabitha Jute, book 1)
Colin Greenland
"A great, big, magnificent, galaxy-shaking plot that will make you forget to eat and sleep!"

The Fourth Circle (1994)
Zoran živković
"Zoran Zivkovic is a subtle, intelligent, wonderfully inventive writer who brings a fresh point of view, an idiosyncratic angle of attack, to everything he produces. He is one of the finest writers currently at work in the 'New Europe.' Read him and celebrate."

The Winter Inside (2000)
Christopher Kenworthy
"Fascinating and original."

Iron Council (2004)
(New Crobuzon, book 3)
China Miéville
"A writer with a rare descriptive gift, an unusually observant eye for physical detail, for the sensuality and beauty of the ordinarily human as well as the thoroughly alien...utterly absorbing."

The Dragon's Nine Sons (2008)
(Celestial Empire, book 1)
Chris Roberson
"A talented storyteller, he has a unique ear, a clever eye, an eloquence all too rare in modern fiction."

The Enigmatic Pilot (2011)
Kris Saknussemm
"Enigmatic Pilot could have been written by a stripped down Pynchon. It's not just tasty -- it's delicious."