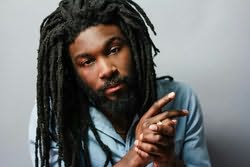 (b.1983)
After earning a BA in English from The University of Maryland, College Park, he moved to Brooklyn, New York, where you can often find him walking the four blocks from the train to his apartment talking to himself. Well, not really talking to himself, but just repeating character names and plot lines he thought of on the train, over and over again, because he's afraid he'll forget it all before he gets home.

The Hate U Give (2017)
(Carter Family , book 1)
Angie Thomas
"As we continue to fight the battle against police brutality and systemic racism in America, THE HATE U GIVE serves as a much needed literary ramrod. Absolutely riveting!"

Sing, Unburied, Sing (2017)
Jesmyn Ward
"If Sing, Unburied, Sing is proof of anything, it's that when it comes to spinning poetic tales of love and family, and the social metastasis that often takes place but goes unspoken of in marginalized communities - let alone the black American South - Jesmyn Ward is, by far, the best doing it today. Another masterpiece."

The Poet X (2018)
Elizabeth Acevedo
"Though vivid with detail about family, love, and culture, The Poet X is more of an exploration of when the poet becomes the poem... Acevedo delivers an incredibly potent debut."

Monday's Not Coming (2018)
Tiffany D Jackson
"Tiffany D. Jackson chips at the world, then cracks it, then shatters it into shards of discomfort and complexity for the reader to grapple with it. Allegedly, undoubtedly, will linger long after it’s over."

Other Words for Home (2019)
Jasmine Warga
"This is a necessary story. We're lucky to have it in the world."

Ways to Make Sunshine (2020)
(Ryan Hart, book 1)
Renée Watson
"Watson, with rhythm and style, somehow gets at . . . the life-changing power of voice and opportunity, all wrapped up in Jade."

Chlorine Sky (2021)
Mahogany L Browne
"A story about heart and backbone, and one only Mahogany L. Browne could bring forth."

Your Corner Dark (2021)
Desmond Hall
"The best way to describe Your Corner Dark, is to say it’s a stomach-knotter. It’s one of those tales that ties you up, turns you inside-out, wrings you like a wet cloth. Desmond Hall leaves us no choice but to root for Frankie Green, a young man in Jamaica doing everything he can to claw himself out of the bear trap of his environment, that has transformed him, not exactly into a bear, but definitely into more than just a good boy. Take note—Hall is a hurricane of a writer."

The Final Revival of Opal & Nev (2021)
Dawnie Walton
"The Final Revival of Opal & Nev is as musical and revolutionary in tone and structure as it is in content. It delves into the complexities of the creative life, specifically as it pertains to Black women, and instead of shying away or egg-shelling, it does what every good book does: tells the truth. A truth that bangs. That shrieks. A siren song to shatter what we've known of the novel. Things won't ever be the same after this. And I'm so happy Dawnie Walton has arrived."

The Tragedy of Dane Riley (2021)
Kat Spears
"In this necessary tale grappling with some of the prickly parts of life—mental health, loss, friendship—Spears proves once again that she's a master, not just of the teenage voice, but also of carefully crafting stories with both heart and teeth. Stories that bond themselves to readers and live with them—in them—far after the last page."
Visitors to this page also looked at these authors
Elizabeth Acevedo
Rick Riordan
James Patterson
Renée Watson
Philip Reeve
John Green
Ransom Riggs
Karen M McManus
Wendelin Van Draanen
Tim Green
Dav Pilkey
Ellen Hopkins
Wendy Mass
Maggie Stiefvater
Holly Bourne
A S King