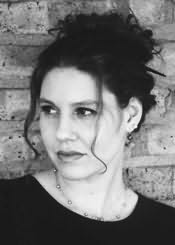 Raised in the wilds of suburban New Jersey, Laura Ruby now lives in Chicago with her family. Her short fiction for adults has appeared in various literary magazines, including Other Voices, The Florida Review, Sycamore Review and Nimrod. A collection of these stories, I'M NOT JULIA ROBERTS, was published by Warner Books in January 2007. Called "hilarious and heart-wrenching" by People and "a knowing look at the costs and rewards of remaking a family," by the Hartford-Courant, the book was also featured in Redbook, Working Mother , and USA Today among others.

When the Moon Was Ours (2016)
Anna-Marie McLemore
"Lushly written and surprisingly suspenseful, this magical tale is not just a love story, but a story of the secrets we keep and the lies we tell, and the courage it takes to reveal our authentic selves to each other and to the world."

A Good Idea (2017)
Cristina Moracho
"Sharp as a fistful of broken glass, dark and twisted as the woods at night, A Good Idea is rural noir at its creepy, literary best."

Gem & Dixie (2017)
Sara Zarr
"Packed with Zarr's sharp-eyed, honest observations of human nature, GEM & DIXIE gives us two sisters crushed by the failures of their parents, and asks how bad things need to get before you have to make a change. A road-trip like you've never been on before."