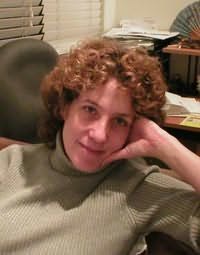 (b.1953)
Madeleine E. Robins is certified as an actor combatant in rapier, quarterstaff, broadsword, and hand-to-hand fighting, and was a member of a troupe of actors who perform Shakespeare scenes with combat for high schools and Renaissance festivals.

Madeleine is a New Yorker by birth, training, and inclination, but recently relocated to San Francisco, where she now lives with her husband (Emmy Award-winning sound editor Danny Caccavo), and their two daughters. She authored the New York Times Notable Book The Stone War, several Regency romances, and many short stories.

Anthologies containing stories by Madeleine E Robins
The Best from Fantasy and Science Fiction: A 40th Anniversary Anthology (1994)
Christmas Magic (1994)
Dying for It (1997)