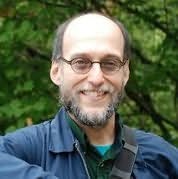 David D. Levine is the author of Arabella of Mars (Tor 2016) and over fifty SF and fantasy stories. His story "Tk'Tk'Tk" won the Hugo Award, and he has been shortlisted for awards including the Hugo, Nebula, and Campbell. Stories have appeared in Asimov's, Analog, F&SF, five Year's Best anthologies, and his award-winning collection Space Magic from Wheatland Press.

David is a contributor to George R. R. Martin's bestselling shared-world series Wild Cards. He is also a member of publishing cooperative Book View Cafe and nonprofit Oregon Science Fiction Conventions Inc. He has narrated podcasts for Escape Pod, PodCastle, and StarShipSofa, and his video "Dr. Talon's Letter to the Editor" was a finalist for the Parsec Award. In 2010 he spent two weeks at a simulated Mars base in the Utah desert.

David lives in Portland, Oregon with his wife Kate Yule.

Series contributed to
Infinity Plus Singles
20. Fear of Widths (2012)

An Alchemy of Masques and Mirrors (2017)
(Risen Kingdoms, book 1)
Curtis Craddock
"In a world shattered by sorcery, a princess without magic battles for peace, aided only by her wits and a drunken sot of a musketeer. A thrilling adventure full of palace intrigue, mysterious ancient mechanisms, and aerial sailing ships!"

The Freeze-Frame Revolution (2018)
Peter Watts
"In The Freeze-Frame Revolution, Peter Watts takes us millions of years into the future and hundreds of light-years away, where an isolated fragment of humanity must confront exotic physics, unfathomable entities, and the unforeseen consequences of their own technologies. But it is a profoundly human story about people, people not unlike us, under inescapable stress. A brilliant, thoughtful story bursting with radical ideas."