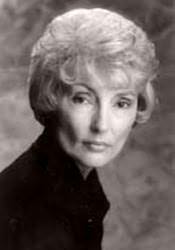 aka Nancy Henderson Ryan
Nancy Henderson is the middle daughter of a Texas rancher and postmaster. She's been married for many years to Joe Ryan, a television executive. Hisoccupation has taken them from border to border and coast to coast. Fortunately, writing is something that can be done anywhere - and Nan shouldknow. The Ryans have lived in Washington, California, New Mexico, Colorado, Arizona, Missouri, Alabama, Georgia, Florida, and their own home state of Texas. Nan says it was fun to move around the country and honestly believes that it has helped her writing. The library and the Internet offer a great deal of information on any given place, but there is nothing quite likeactually living in a locale where a book is set.

She began her writing career in 1981. She flirted with writing mysteries, but never finished any. Then, as fate would have it, she saw an article in Newsweek magazine entitled "From Bedroom to Boardroom." It was an interesting story on the women who were writing romance novels. Nan was intrigued. She had never read a romance. She bought a couple, read them, and knew she'd found her calling. She sat down at the Smith Corona typewriter and began her own romance. The first one never left her house. It is burieddeep in a trunk and Nan says it will never be shown to anyone. Her second book sold and she's been writing since. Twenty-two romance novels later, shestill enjoys writing and realizes she's been blessed to have found what she loves to do.

The winner of numerous awards, Nan Ryan says one of the nicest things ever written about her was printed in the St. Petersburg Times. Correspondent AnnV. Hull wrote: "Romance novelist Nan Ryan could step right into the pages of one of her paperbacks. Tall and slender, with smokey eyes and pearly skin,Nan Ryan looks like movie star Jessica Lange's older sister. Ryan writes the most imaginative and bold love scenes, some of which would surely shock herformer teachers at Abilene Christian University."