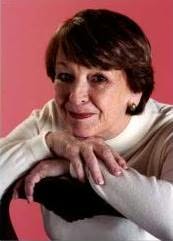 (Mary Forrest George)
Scotland (1940 - 2010)
Mary George, well-known as Elizabeth Thornton was born and educated in Aberdeen, Scotland, where she taught school for a number of years beforeestablishing her own nursery school in 1967, St. Swithin Street Nursery School, an institution that is still going strong today.

In 1969, she and her husband then emigrated to Canada with their three young sons. She taught kindergarten and Grade One for a number of years inWinnipeg, Manitoba, before, in 1977 becoming a lay minister at a Presbyterian Church in Winnipeg. As part of her continuing education, she enrolled in evening classes at the University of Winnipeg to study ClassicalGreek. Five years later, having completed an Honor's thesis on Women in Euripides, she received her B.A. (Classics Gold Medalist).

After reading her first romance, a Regency by Georgette Heyer, she was captivated by the genre. Hereafter, writing became her hobby. In 1987, herfirst book, a small Regency entitled, Bluestocking Bride, was published by Zebra books. Now, she is the author of twenty-four historical romances, andtwo novellas. She has been nominated for and received many awards including the Romantic Times Trophy Award for the best New Historical Regency Author and Best Historical Regency. Seven of her novels have been finalists in the Romance Writers of America Rita awards, Scarlet Angel, Strangers at Dawn, Princess Charming and The Perfect Princess, Shady Lady, The Marriage Trap, and The Bachelor Trap. Her books appear regularly on national best-selling lists and have been translated into many languages.