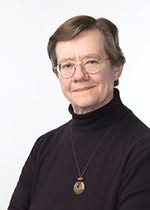 Priscilla Royal, author of several books from Poisoned Pen Press in the Prioress Eleanor and Brother Thomas medieval mystery series, grew up in British Columbia and earned a BA in World Literature at San Francisco State University where she discovered the beauty of medieval literature. Before retiring from the US Federal Government in 2000, she worked in a variety of jobs, all of which provided an excellent education in the complexity of human experience and motivation. She is a theater fan as well as a reader of history, mystery, and fiction of lesser violence. The authors who most inspired her to commit medieval murder were Ellis Peters and Sharon Kay Penman. She is a member of California Writers Club, Mystery Writers of America, and Sisters in Crime.

The Land Beyond the Sea (2019)
Sharon Kay Penman
"As one of Ms. Penman's oldest and most ardent fans, I believe The Land Beyond the Sea ranks as one of her three most accomplished and compelling books. Her books should never be gulped, only savored, and readers will be thrilled to both read and reread her latest."
Visitors to this page also looked at these authors
Candace Robb
Melvin Starr
Susanna Gregory
Paul Doherty
Jeri Westerson
Rosemary Rowe
C J Sansom
Peter Tremayne
Maureen Ash
Michael Jecks
Alys Clare
P F Chisholm
Deanna Raybourn
S J Parris
Anne Perry
Steven Saylor