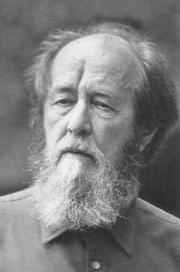 (Aleksandr Isaevich Solzhenitsyn)
Russia (1918 - 2008)
Aleksandr Isayevich Solzhenitsyn was a Soviet and Russian novelist, dramatist, and historian. Through his writings he helped to make the world aware of the Gulag, the Soviet Union's forced labor camp system particularly The Gulag Archipelago and One Day in the Life of Ivan Denisovich, two of his best-known works.

Novellas
One Day in the Life of Ivan Denisovich (1962)