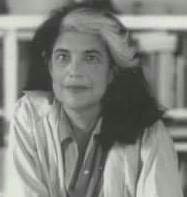 (1933 - 2004)
Susan Sontag was one of America's best-known and most admired writers. Her critical essays established her as one of the leading commentators on contemporary culture. She was the author of several work of fiction and also wrote and directed four feature films and stages plays in the US and Europe.
Novels
The Benefactor (1963)
Death Kit (1967)
The Volcano Lover (1992)
In America (1999)

Omnibus
Illness As Metaphor and AIDS and Its Metaphors (1989)

Isaac and the Undertaker's Daughter (1983)
Steve Stern
"These seven stories, written with great brio, portray zany Jewish family life ever so slightly haunted by demons. Steve Stern may be a late practitioner of the genre, but he is an expert one. Whiplash sentences, lots of energy and charm."

Summer in Baden-Baden (1987)
Leonid Tsypkin
"I would include [it] among the most beautiful, exalting, and original achievements of a century's worth of fiction and para-fiction."

Soldiers of Salamis (2003)
Javier Cercas
"With irresistible directness and delicacy, Javier Cercas engages in a quick-witted, tender quest for truth..."

Vertical Motion (2011)
Can Xue
"If China has one possibility of a Nobel Laureate it is Can Xue."

Satantango (2012)
László Krasznahorkai
"The contemporary master of the Apocalypse."