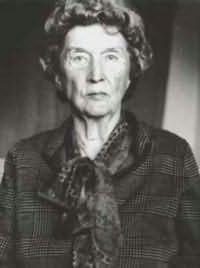 Australia (1902 - 1983)
Aunt of Elizabeth Stead
Christina Stead was an Australian novelist and short-story writer acclaimed for her satirical wit and psychological penetration. Stead was a committed Marxist, but never a member of the Communist Party. Although her birth and death were both in Sydney, New South Wales, Stead lived many years abroad in England and the United States. She first departed Australia in 1928, and worked in a Parisian bank from 1930 to 1935. Stead also became involved with the writer, broker and Marxist political economist William J. Blake, with whom she travelled to Spain (leaving at the outbreak of the Spanish Civil War) and to the USA. They married in 1952 after Blake was able to obtain a divorce from his previous wife. It was after his death from stomach cancer in 1968 that she returned to Australia. Indeed, Stead only returned to Australia after she was denied the Britannica-Australia prize on the grounds that she had "ceased to be an Australian."
Novels
The Seven Poor Men of Sydney (1934)
The Beauties and the Furies (1936)
House of All Nations (1938)
The Man Who Loved Children (1940)
For Love Alone (1944)
Letty Fox (1946)
A Little Tea, a Little Chat (1948)
The People with the Dogs (1952)
Colour of Asia (1955)
Dark Places of the Heart (1966)
aka Cotter's England
The Little Hotel (1973)
Miss Herbert (1976)
The Palace with Several Sides (1986)
I'm Dying Laughing (1987)