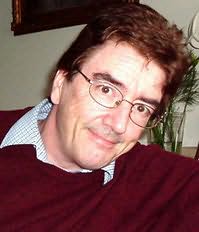 aka Dr Jan Berghoff, Alan Blackwood, Thomas Luke, Anton Rimart, Angel Smith, Edward Thorne, Katherine Winston
Graham Masterton has published more than thirty-five horror novels and three short story collections: his debut novel, The Manitou, was an instant bestseller. His more recent critically acclaimed novels include The Chosen Child, Trauma, Spirit, and Prey. He is an Edgar Award and Bram Stoker Award-winner and a World Fantasy Award-nominee. In addition to his prolific fiction career, Masterton is also renowned for his bestselling sex guides, including How to Drive Your Woman Wild in Bed and Wild Sex for New Lovers. Born in Edinburgh in 1946, he lives with his wife Wiescka in a Gothic mansion in Cork, Ireland, where he is currently working on his next horror novel.

Slob (1987)
(Chaingang, book 1)
Rex Miller
"Terrific! Rex Miller writes like a truck-driver tailgating you at 80 mph in a Kenworth TransOrient. In Slob he induces genuine panic - making you read faster than you want to - too scared to go on, too terrified to stop."