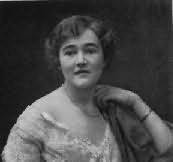 (Dorothy Emily Stevenson)
Scotland (1892 - 1973)
Dorothy Emily Stevenson was born in Edinburgh on the 18th, November 1892. She is usually referred to as D. E. Stevenson and during her lifetime she wrote over 40 novels, which were published on both sides of the Atlantic. She married Captain James Reid Peploe in 1916 and had four children. Her first book Peter West was published in 1923 but she did not really start to become a novelist until 1932 with the publication of her first "Mrs. Tim" book. Dorothy Emily Stevenson died the 30th of December 1973 at the age of 81 and was buried in Moffat, Dumfriesshire, Scotland where she lived for many years.

Katherine
1. Katherine Wentworth (1964)
2. Katherine's Marriage (1965)
aka The Marriage Of Katherine