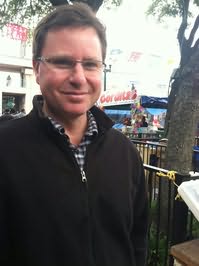 Australia
Dominic grew up in Sydney, Australia and now lives in Austin, Texas. His short fiction has been nominated for a Pushcart Prize and appeared in numerous journals and magazines, including The Atlantic Monthly and The Chicago Tribune.

Dominic is the author of four novels, most recently of The Last Painting of Sara de Vos (forthcoming from Farrar, Straus and Giroux) and Bright and Distant Shores (a selection for Kirkus Reviews' "Best Books of 2011," and shortlisted for Australia's Vance Palmer Fiction Prize and The Age Book of the Year.)

His awards include the Dobie Paisano Fellowship from the Texas Institute of Letters, the Sherwood Anderson Fiction Prize, and the Gulf Coast Fiction Prize.

In 2006, his debut novel "The Mercury Visions of Louis Daguerre" was selected for the Barnes and Noble Discover Great News Writers Program. It also received the Steven Turner Prize for First Fiction from the Texas Institute of Letters. Dominic's second novel, "The Beautiful Miscellaneous," was a Booklist Editors' Pick and optioned for a film by Southpaw Entertainment.

Dominic serves on the fiction faculty in the Warren Wilson MFA Program for Writers and has taught recently at the University of Texas at Austin, Rice University, and Southern Methodist University.
Novels
The Mercury Visions of Louis Daguerre (2006)
The Beautiful Miscellaneous (2007)
Bright and Distant Shores (2011)
The Last Painting of Sara de Vos (2016)
The Electric Hotel (2019)

Heretics (2017)
Leonardo Padura
"A beautifully teeming novel of revelation and family history, alive with the cadences of Cuba and the sorrows and hopes of the WWII Jewish diaspora."

The Removes (2018)
Tatjana Soli
"Tatjana Soli braids a beautiful and harrowing tale of Custer, his wife, and a fifteen-year-old girl held captive out on the western plains. Intimate and panoramic all at once, this is a novel of transformation and self-reliance, a book that powerfully questions what we know of women on the American frontier."