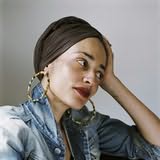 (b.1975)
Zadie Smith was born in north-west London in 1975. She is the author of the novels White Teeth, The Autograph Man, On Beauty, NW and Swing Time, as well as The Embassy of Cambodia and the essay collection, Changing My Mind. She is also the editor of The Book of Other People, is a fellow of the Royal Society of Literature and has twice been listed as one of Granta's 20 Best Young British Novelists. She has won the Orange Prize for Fiction, the Whitbread First Novel Award and the Guardian First Book Award among many others, and been shortlisted for the Man Booker Prize and the Baileys Women's Prize for Fiction.

Plays
The Wife of Willesden (2021)
aka The Wives' Tales

Novellas
The Embassy of Cambodia (2013)

A Room with a View (1908)
E M Forster
"I loved it. My first intimation of the possibilities of fiction."

Drinking Coffee Elsewhere (2003)
Z Z Packer
"The kind of brilliance for narrative that should make her peers envious and her readers very, very grateful."

Oblivion (2004)
David Foster Wallace
"A visionary, a craftsman, a comedian and as serious as it is possible to be without accidentally writing a religious text. He can do anything with a piece of prose, and it is a humbling experience to see him go to work on what has passed up till now as 'modern fiction'. He's so modern he's in a different time-space continuum from the rest of us. Goddamn him."

Remainder (2006)
Tom McCarthy
"One of the great English novels of the past ten years."

The Humorist (2012)
Russell Kane
"Russell Kane is a death defier, the sort of comedian who won't let a moment pass without filling it with laughter."

Fraternity (2020)
Benjamin Nugent
"If university is where we finally grow up, what role does the college campus play in creating the adult American man? In these dark, witty, and sharply written stories, Benjamin Nugent takes an unflinching look at that strange tradition, the all-male fraternity, which, in his gifted hands, begins to look like a very strange and insidious social experiment. Take a boy, transform him into a ‘bro,’ and then release into the wild…"