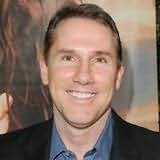 (b.1965)
Nicholas Sparks is one of the world's most loved authors. His novel, A Bend In the Road, reached number two in the New York Times bestseller list and The Rescue was a number one. His other books, The Notebook, Message In a Bottle and A Walk to Remember - were international bestsellers that have been translated into more than thirty languages and adapted into major films. He is also co-author of Wokini: A Lakota Journey to Happiness and Self-Understanding. Nicholas Sparks lives in North Carolina with his wife and children.

Lisey's Story (2006)
Stephen King
"Lisey's Story is a wondrous novel of marriage, a love story steeped in strength and tenderness, and cast with the most vivid, touching and believable characters in recent literature. I came to adore Lisey Landon and her sisters, I ached for Scott and all he'd been through, and when I finally reached the bittersweet and heartfelt conclusion, my first thought was that I wanted to start over again from the beginning, for it felt as if were saying good-bye to old friends. This is Stephen King at his finest and most generous, a dazzling novel that you'll thank yourself for reading long after the final page is turned."

The Lost Madonna (2007)
Kelly Jones
"Kelly Jones is a wonderful writer, and definitely one to watch."

The Map That Leads to You (2017)
J P Monninger
"Romantic and unforgettable."