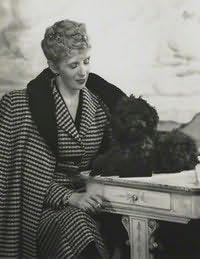 (1894 - 1975)
Daughter of Capt. George Connolly Benson and Margaret Jones, Marguerite was adopted by Joseph and Margaret Jane Steen. Educated at a private school and subsequently, with much more success, at Kendal High School, at 19 she became a teacher in a private school. After three years she abandoned that career and went to London to fulfill her ambition of working in the theatre. Failing to gain entry to the theatrical world, she accepted instead an offer to teach dance in Yorkshire schools. This earned her a comfortable living (rising to over £500 a year) which enabled her to spend long periods travelling in France and Spainthe latter becoming her adopted homeland.

In 1921, she joinrf the Fred Terry/Julia Neilson drama company, at £3 per week, and spent three years touring with them. She was befriended by Ellen Terry, and when she found herself unemployed in 1926, took her advice and wrote The Gilt Cage, published in 1927. She went to write 40 more books.

Her first major success was Matador (1934), for which she drew on her love of Spain, and of bullfighting. This was picked up by both the Book Society in Britain, and the Book of the Month Club in the USA. Also a best-seller on both sides of the Atlantic was her massive saga of the slave-trade and Bristol shipping, The Sun Is My Undoing (1941); this was the first part of a trilogy, but the remaining volumes were far less popular.[5] Though never quite accepted by literary critics, she was elected a Fellow of the Royal Society of Literature in 1951. Her two volumes of autobiography, Looking Glass (1966) and Pier Glass (1968) offer some delightful views of the English creative set from the 1920s to the 1950s.