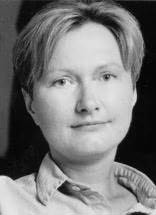 (b.1949)
Roberta Ann (R. A.) MacAvoy is a fantasy and science fiction author in the United States. Several of her books draw on Celtic or Taoist themes. She won the John W. Campbell Award for Best New Writer in 1984. R. A. MacAvoy was born in Cleveland, Ohio to Francis and Helen MacAvoy. She attended Case Western Reserve University and received a B.A. in 1971. She worked from 1975 to 1978 as an assistant to the financial aid officer of Columbia College of Columbia University and from 1978 to 1982 as a computer programmer at SRI International before turning to full-time writing in 1982. She married Ronald Allen Cain in 1978.