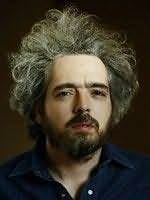 (b.1970)
Stav Sherez is a British novelist whose first novel, The Devil's Playground, was published in 2004 by Penguin Books and was shortlisted for the CWA John Creasey Dagger. Sherez grew up in London and attended Latymer Upper School and the University of Leeds. Sherez's second novel, The Black Monastery, was published by Faber & Faber in April 2009. From 1999 to 2004 he was a main contributor to the music magazine Comes with a Smile. From December 2006 he has been literary editor of the Catholic Herald.

City Without Stars (2018)
Tim Baker
"One of those books that just won't let you go - not when you're reading it and not for a long time afterwards. An exhilarating and kaleidoscopic novel that will also break your heart. Assured, trenchant and gripping, Baker has assumed his place among those crime writers you must read."

Liberation Square (2019)
Gareth Rubin
"Liberation Square is a superb and intelligent piece of alternate history. By turns gripping, terrifying and trenchant, it is a remarkably assured debut making Rubin's name one to watch out for in the crowded crime landscape."