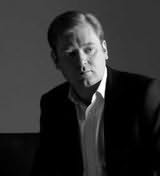 (b.1965)
RJ Ellory is the author of eight novels, the most recent entitled Saints of New York. Candlemoth, his first-published, was shortlisted for the CWA Steel Dagger, as was his fourth, City of Lies, in 2006. His fifth novel, A Quiet Belief In Angels was a Richard & Judy Book Club selection in 2007, and went on to win the Livre De Poche Award, The Strand Magazine Novel of The Year, and the Inaugural Nouvel Observateur Prize. A Quiet Vendetta won the Quebec Laureat and the Villeneuve Readers' Prize. A Simple Act of Violence, Ellory's sixth novel won the Theakston's Crime Novel of the Year 2010. He has been nominated for a further seven international awards including two Barrys, the 813 Trophy, the Mystery Booksellers of America Award and the Europeen Du Point. He has also written the screenplay of A Quiet Belief In Angels for Oscar-winning director, Olivier Dahan. His books are now available in twenty-four languages.

Cut Adrift (2010)
(DI Jon Spicer, book 6)
Chris Simms
"A dark under-current of intrigue... I was drawn in relentlessly. Simms is at the forefront of new British crime fiction."

The Siren (2010)
(DC Gary Goodhew Mystery, book 2)
Alison Bruce
"You are pulled relentlessly in as Bruce racks up the tension. Menacing and insidious, this is a great novel."