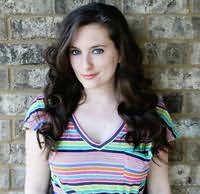 Tyler Anne Snell writes a little bit of everything but has a soft spot for thrillers and mysteries filled with sexual tension. Her first Harlequin Intrigue is set to release in April 2015. Here's a quick rundown to get to know her better!

Her love for writing started with the video game Zelda and Author Madeleine LEngles Time Quartet series and has snowballed out of control ever since. She has never wanted to be anything other than an author (apart from a real life Final Fantasy character or Jackie Chans best friend and sparring buddy) and if you asked her what is her favorite activity other than writing, she would point to her filled-to-the-brim bookcase.


Tyler holds a B.S. degree in Design, Technology & Industry with a creative writing minor, which has allowed her to become a freelance designer, social media manager, and bloggera vocation that has kept her fed while writing in her spare time.

Like most writers, Tylers procrastination has been greatleaving three books unfinished until the So You Think You Can Write 2013 contest. She placed in the Top 50 out of 650 entries worldwide. The experience lit a fire under her backside and, after some back and forth with a wonderful Harlequin editor named Allison, she was asked to join the Harlequin Intrigue family!