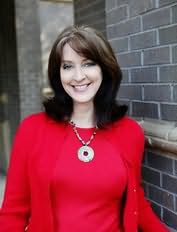 Debbie Herbert writes paranormal romance novels with a touch of Southern whimsy. Her novels reflect the belief that love, like magic, casts its own spell of enchantment.

She is a 2012 Maggie finalist in both YA and paranormal romantic suspense and a member of the Georgia Romance Writers of America. Shes always been fascinated by magic, romance and Gothic stories of any kind. Debbie holds a degree in English as well as a masters degree in library studies.

Debbie is happily married and resides in Alabama. Her oldest son, like many of her characters, has autism and her youngest son is with the U.S. Army, currently deployed in Afghanistan. Unlike her mermaid characters, Debbie adores cats and has two feline companions.

Indelible (2021)
(Sean McPherson, book 1)
Laurie Buchanan
"Fast-paced and with plenty of plot twists, you’re sure to be swept up into the story."

The Secrets of Us (2021)
Lucinda Berry
"Lucinda Berry’s The Secrets of Us is a tense, psychological thriller that explores the dark corners and turns a mind can take when it harbors secret guilt. The interplay between sisters Krystal and Nichole and their hidden past is gradually revealed and in the end, the plot twists keep coming. Right and wrong can be ambivalent and this story explores all shades of gray, from their dysfunctional family, to an old childhood friend, and to a husband that may or may not be too good to be true. Berry’s background as a clinical psychologist shines in this novel with a character so disturbed they spend time in seclusion lockdown at a psychiatric ward. Don’t miss this one!"
Visitors to this page also looked at these authors
Rita Herron
Mary Burton
Linda Howard
Tami Hoag
Debra Webb
Mick Herron
Kate Hewitt
Casey Hill
Kendra Elliot
Elizabeth Heiter
Edwin Hill
Patricia Highsmith
James Herbert
Brian Herbert
David Hewson
Carl Hiaasen