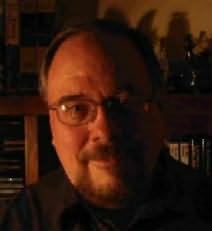 (b.1953)
Before he turned his attention to Science Fiction, (William) Mark Simmons was winning awards for his writing, first as a newspaper journalist and later as a broadcast copywriter. His first book was a finalist for the Compton Crook Award and made the LOCUS Best List in 1991. When he isn't writing, Mark is in front of the camera or microphone having worked in television and now radio where his is the morning voice for Radio Kansas and can be heard throughout half of the Sunflower State.