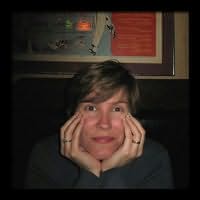 Ally Thomas loves writing fantasy and paranormal books for that showcase vampires, werewolves, zombies, witches, and any furry monsters who go bump in the night. She enjoys imagining new origins for these traditional creatures and seeing where it'll take her. Ally's paranormal series, The Vampire from Hell has been on the Top 100 Amazon bestsellers list in Fantasy since its release in 2011.

About The Vampire from Hell
Rayea is a daughter of Satan, and a vampire. But she's on our side. According to Rayea, the oldest daughter of Satan, the origin of vampires started in Hell, and it started with her. Rayea isn't daddy's little girl, even if he is the most powerful fallen angel around. He wants her to take an active role in the family business. But she's not interested in his schemes for world domination. Instead she wants to spend her time shopping on the Internet, rescuing humans from a horrific eternity, and practicing martial arts with her seven foot hellhound. Then one day everything changes.