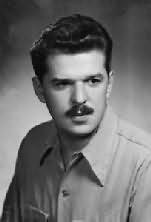 aka Al Conroy, Elaine Evans
Florida writer Gil Brewer was the author of dozens of wonderfully sleazy sex/crime adventure novels of the 1950's and 60's, including Backwoods Teaser and Nude on Thin Ice; some of them starring private eye Lee Baron (Wild) or the brothers Sam and Tate Morgan (The Bitch) . Gil Brewer, who had not previously published any novels, began to write for Gold Medal Paperbacks in 1950-51. Brewer wrote some 30 novels between 1951 and the late 60s - very often involving an ordinary man who becomes involved with, and is often corrupted and destroyed by, an evil or designing woman. His style is simple and direct, with sharp dialogue, often achieving considerable intensity.

Brewer was one of the many writers who ghost wrote under the Ellery Queen byline as well. Brewer also was known as Eric Fitzgerald, Bailey Morgan, and Elaine Evans.