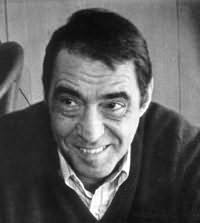 aka J T MacCargo, Marco Malaponte
Peter Rabe was born in Germany as Peter Rabinowitsch in 1921,immigrating to the U.S. with his father in 1938 to escape the Nazis. Heenrolled at Ohio State University and received his Ph.D. in psychologyfrom Western Reserve in Cleveland. Married, he began his writing careerby turning in a humorous story about the birth of his first daughter.Soon after, he began submitting hardboiled stories to Gold Medal wherehe found an enthusiastic editor and a ready market.

After a divorce, health problems and the death of the paperbackoriginal, Rabe eventually quit writing and took up teaching psychologyat California Polytechnic State University in the late 60's. He died in1990 at his home in Atascadero, California.