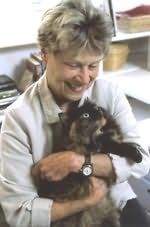 (b.1928)
Shirley Rousseau Murphy is the author of Cat in the Dark, Cat on the Edge, Cat Under Fire, and Cat Raise the Dead, and has received five Council of Authors and Journalists Awards for previous books. She graduated from San Francisco Art Institute, has worked as a commercial artist and has exhibited paintings and sculptures extensively on the West Coast. She and her husband live in Carmel, California. Their cats have included a tom that twice warned them of burglars in the middle of the night by growling, and a cat that liked to ride horseback.