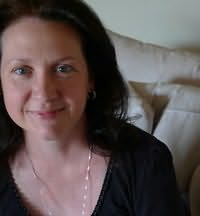 (b.1967)
Tina Whittle is a mystery writer living and working in the Georgia Lowcountry. The Dangerous Edge of Things, her first novel, debuted February 2011 from Poisoned Pen Press, followed in March 2012 by Darker Than Any Shadow, the second in the series. Described by Publisher's Weekly as a "tight, suspenseful debut," this Atlanta-based series features gun shop owner Tai Randolph and corporate security agent Trey Seaver.

A nominee for Georgia Author of the Year in 2012, Whittle's short fiction has appeared in The Savannah Literary Journal, Alfred Hitchcock's Mystery Magazine, and Gulf Stream, which selected her story "Lost Causes and Other Reasons to Live" as the 2004 winner of their Mystery Fiction contest. When not writing or reading, she enjoys golf, sushi, mini-pilgrimages, and spending time with her family (one husband, one daughter, one neurotic Maltese and three chickens).