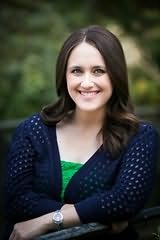 (b.1982)
Becky Albertalli is a clinical psychologist who has had the privilege of conducting therapy with dozens of smart, weird, irresistible teenagers. She also served for seven years as co-leader of a support group for gender nonconforming children in Washington, DC.

Albertalli attended college in Connecticut and majored in psychology before moving to Washington, D.C. and gaining a doctorate in clinical psychology. She worked as a psychologist until 2012—when her first son was born—and subsequently decided to try writing a novel.

She now lives with her family in Atlanta.

The Hate U Give (2017)
(Hate U Give, book 1)
Angie Thomas
"Fearlessly honest and heartbreakingly human. Everyone should read this book."

Goodbye Days (2017)
Jeff Zentner
"Hold on to your heart: this book will wreck you, fix you, and most definitely change you."

Picture Us In The Light (2017)
Kelly Loy Gilbert
"Picture me madly in love with this moving, tender, unapologetically honest book."

Running with Lions (2018)
Julian Winters
"Funny, wise, and ridiculously romantic. It hit me right in the heart."

Darius the Great Is Not Okay (2018)
(Darius the Great, book 1)
Adib Khorram
"Heartfelt, tender, and so utterly real. I'd live in this book forever if I could."

The Last Best Story (2018)
Maggie Lehrman
"Honest, messy, and infinitely charming. This is my favorite kind of love story."

Opposite of Always (2019)
Justin A Reynolds
"Read this one, reread it, and then hug it to your chest. Reynolds’ debut is wise, heartfelt, and wildly, infinitely charming."

I Wish You All the Best (2019)
Mason Deaver
"Heartfelt, romantic, and quietly groundbreaking. This book will save lives."

It Sounded Better in My Head (2019)
Nina Kenwood
"I am all-caps OBSESSED with this achingly insightful, utterly charming, beautiful heart-punch of a book. Instant favorite."

The Gravity of Us (2020)
Phil Stamper
"I'm so starry-eyed for this wise, romantic gem of a book."

The Love Hypothesis (2020)
Laura Steven
"Laura Steven simultaneously destroyed the patriarchy and made me laugh so hard I choked. I will protect Izzy O'Neill with my life."

Felix Ever After (2020)
Kacen Callender
"Felix Ever After never shies away from the beautiful, messy complexity of love in all its forms. This book is a gift, from start to finish."

Dan Unmasked (2020)
Chris Negron
"Dan Unmasked is a grand slam of a debut: timeless, moving, and filled to the brim with heart. I can’t stop thinking about it."

K-pop Confidential (2020)
Stephan Lee
"I'm still giddy over this electrifying, big-hearted, all-kill smash of a debut. I couldn't put it down."